Together with the City of Farmington, Mineral Area Council on the Arts is swooning over the opportunity to host Kris Berg and Wayne Pope performing with the Mineral Area Kicks Band on Saturday, November 20, at 7:00 p.m. at the Centene Center in Farmington.  You know them from the Baby Boomer Reunion Concerts, but did you know they give stellar jazz performances?

Kris Berg was first introduced to jazz music when he attended North County High School.  Now based out of the Dallas, Texas area, he is an international best-selling jazz composer and arranger.  He has written charts for Kurt Elling, Sean Jones, Veronica Swift, Delfeayo Marsalis, Wayne Bergeron, and Chris Vadala.  He has served as a jazz guest clinician across the country and his charts have been used for honors bands in Texas, Oklahoma, Arizona, South Carolina, Maine, Maryland, Missouri and for professional college and public-school bands around the globe.

Berg is the Artistic Director for Jazz for the Greater Dallas Youth Orchestra foundation and directs the GDYO Jazz Orchestra.  He taught college for almost 30 years and is the founder of the award-winning Jazz Program at Collin College including the Collin Jazz Fest and the Texas All-Star Jazz Camp. He also serves as the Music Director for Willow Bend Church in Plano, Texas.

Wayne Pope is an experienced stage, concert and recital artist who has shared his “rich, clear baritone voice” throughout the US, Israel and Europe. He began playing and singing professionally at a young age and has performed in groups ranging from jazz to country, rock to pop, musical theater to classical. He is a charter member and regular performer in the annual Baby Boomers Reunion Concert. In 2017 he combined his talents of classical/musical theatre/jazz with pianist Ryan Jones and the renown Kicks Band for Mineral Area Council on the Arts in a performance entitled From Bach to Basie: A Singin’ Affair!  He most recently appeared with Broadway singer Bronson Norris Murphy (Phantom of the Opera) and pianist/music director Joshua Zecher-Ross in On Broadway!

As a classical singer, Pope created the title role in The Martyrdom of Saint Polycarp by noted film, television and classical composer JAC Redford, with a European premiere in Rome, Italy at the historic La Chiesa Nuova. He has appeared with many symphonies locally and nationally. His performance of Vaughan Williams’ Fantasia on Christmas Carols with the South Arkansas Symphony, under the baton of Kermit Polling, was featured on National Public Radio’s Performance Today with Martin Goldsmith. Operatic engagements include Columbia Lyric Opera, The Colorado Music Festival and Nashville Opera as well as guest artist performances at various universities.

Pope is Professor of Voice and Voice Area Coordinator at Western Kentucky University where, for over 20 years, he has served as Music Director in the annual MainStage collaboration with the Department of Theatre and Dance.

The Mineral Area’s own Kicks Band will be performing the modern jazz tunes composed by Kris Berg and Berg’s arrangements for Wayne Pope’s vocals.

The Kicks Band has been honored multiple times throughout the state of Missouri and performed at numerous state music conventions over the years.  This band has been invited to perform in January 2022 at the Missouri Music Educators Association state-wide convention for the second time.

Conceived in the fall of 1978 by Mr. Mike O’Brien, the chair of the Mineral Area College Music Department, the Kicks Band’s purpose was to give directors and interested community people an outlet to play their instruments, meeting weekly on Wednesdays during the school year to play “for kicks”.

The band became the house band for the jazz festival held at Mineral Area College since 1987.  The jazz festival, now known as the Mike O’Brien/Carol Moore Memorial Jazz Festival, has hosted many international jazz luminaries over the years, thus granting the opportunity for the Kicks Band to perform with jazz greats including Doc Severinsen, Louie Bellson, New York Voices, Joey DeFrancesco, Wayne Bergeron, Phil Woods and many more!

The original director, Mike O’Brien, was followed by Dan Stecker, and Scott Harris.  The current Kicks Band director, Dan Schunks, assumed the directorship in the fall of 1993.  Under his leadership the band has continued to develop and grow as a synchronous unit, as their multiple honors reveal.

Tickets for the Jazz for Modern Times concert are $11.50 and available at the Civic Center in Farmington or by calling (573) 756-0900.  For questions, contact Scottye Adkins at sadkins@MineralArea.edu or call (573) 518-2125.  The City of Farmington and Mineral Area Council on the Arts presents the performance with public support from the Missouri Arts Council, a state agency. 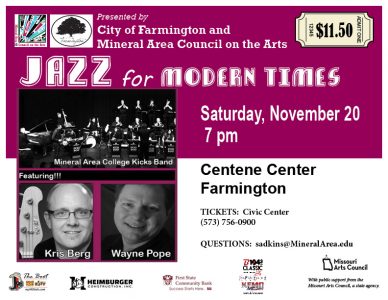